How to Play Mini Xiang Qi

Mini Xiang Qi is a smaller variation of Xiang Qi (or Chinese Chess) played on a 7x7 board. Its design is credited to Shigenobu Kusumoto (1974). Each player starts off with 12 pieces each: 1 General, 2 Horses, 2 Cannons, 2 Chariots and 5 Soldiers (see initial setup below). 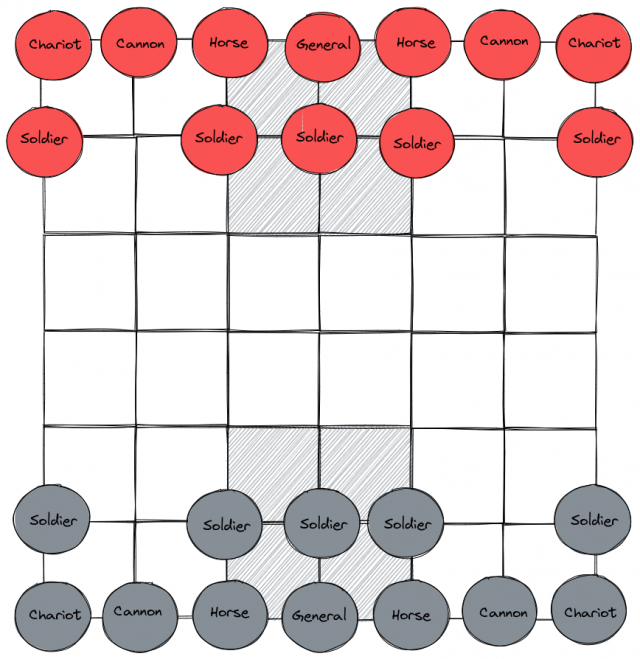 There are no Advisors, Elephants or river in this abridged version of the game. Most of the rules are the same with the exception that a soldier can move forward, left and right from the beginning of the game as though it has already crossed the river. In Mini Xiang Qi there is no river on the board and a player wins by checkmating the opposing side’s general. Here’s a refresher on how the relevant pieces move.

General
Moves 1 step vertically or horizontally but not diagonally.
Generals must stay in their castle

Horse
May move 1 step vertically or horizontally and then 1 step diagonally. It can not move if there is any piece blocking the path.

Cannon
Moves like a rook but in order to capture must jump over exact one piece horizontally or vertically.

Soldier
Moves and captures by moving one step forward and one step horizontally. Soldiers can also be promoted (optional) to a Chariot, Cannon or Horse after reaching the last 2 opposite ranks.