How to Play Seega

Seega is a small abstract game from 19th century Egypt. It has some similarities with the tafl family of games with its sandwiching capture method. It is played on a 5x5 grid with 24 pieces (12 per player). 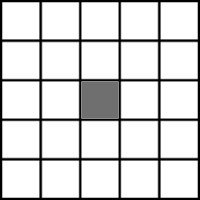 Each player gets 12 pieces and take turns placing 2 pieces on the board, leaving the middle square empty.

The first player to capture all the opponent pieces wins.