Brandub is an Irish variant of hnefatafl. It is played on a 7x7 board with 13 pieces. Although it is the tiny sibling of all the hnefatafl games, it is just as fun and strategic. 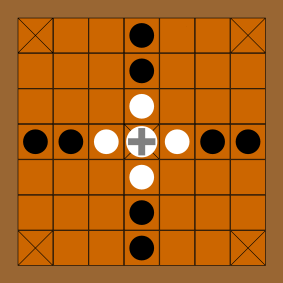 The king piece goes on the central square surrounded by his defenders. The attacker pieces surround the defenders making a cross symbol.

Generally speaking, most people feel that it’s easier to win as the defender. This is one of the characteristics of hnefatafl games due to it’s asymmetrical nature. The strategies of a defender is more long term. Not to worry, as each player gets better the game becomes more balanced.